Love that the weight is distributed over the shoulders and not the back. Size guidelines from another site were as follows:Size Chest/Waist Strap WeightSmall 26 inches 15-30 lbsMedium 31 inches 30-55 lbsLarge 36 inches 55-85 lbs

H
Hannah Fritz
It's been great so far

We have only used his back pack for about a 2 hr trail walk. It's been great so far! He feels important and the fit is great. It doesn't restrict his movement a bit! He ran, jumped, walked, and swam with it! He carried my keys, phone, an apple, a water bottle, and treats in his two pockets and did great. I ordered at Medium size for my dog. The adjustable straps made it easy to fit him.

Your browser does not support HTML5 video. My girl is 51 pounds, very long legged and lean border Collie/blue heeler mix. She is super athletic, and does very long hikes with me up to 25 miles at a time. Needless to say, carrying water for both of us has been a chore on me! I was thinking a lightweight packet that doesn’t take up too much space on her body, which could hold to water bottles and food, and something that wouldn’t drive her crazy.This pack is the perfect fit. It’s very streamlined wh this pack is the perfect fit. It’s very streamlined and holds just enough for an overnight trip.My dog is still able to run around like normal, and only had to learn that she had to adjust her clearance when racing around trees! I took a little while to get the PAC adjusted perfectly, but once it got dial then, we were good to go. Absolutely cannot beat the price. It’s super well-made and durable. Definitely worth trying out!

T
Tundra Gal
Very pleased, good quality, but there are TWO versions being sold by --not mentioned in the descr...

Ours was different than what was shown, which explains some of the questions and reviews. I expected a pack similar to what we had borrowed--a one piece pack that slipped over the dog. What we got (as others have mentioned) was in TWO pieces. There's the bottom part that has two slim, mesh pockets on the side, and then the "handle" on top. Then you slip over the "saddlebag" portion which hash an opening in the middle, so it goes over the protruding "handle". This actually attaches to the bottom piece with a plastic closer. I contacted Outward Bound with questions and they said it's their Quick Release version. So actually, it's two harnesses in one, once you clip it in place. You could use the under layer by itself, but we use both. Now that I know, looking carefully at the photo, I can see it doesn't match ours.Our trainer recommended it for our 18 month old 82 pound hound/lab mix as he's got LOTS of energy. She had the older version (which was the style we expected) and put water bottles on each side to make him work a bit harder. It does a good job at that. He does heel better with it on. I also put his empty poop bags in it. Once the bags are "used" I carry them, as it would make the pack unbalanced. I've had no problems with it shifting at all, even when he shakes. As far as size, we got the large. Our guy is BIG and at first we thought it was too small, but we re-adjusted the straps and it fits fine. The packaging said there was also an XL, but I haven't seen it for sale anywhere, and he doesn't need it. (Some people think he's a Great Dane mix, nope) To get it off, we release the two side/bottom clips, then pull it over his head, as one piece. It's a little bit of a hassle and it may be easier to loosen the front straps, but it would be a hassle. To put it on, we slip it over his had and back and put his right foot thru, then strap him in.. We've had it about 2 weeks, and follow the advice of leaving the side zipper pockets with the bottles open slightly, to decrease the pulling on the zipper.However, there doesn't seem to be an issue.It's made much better than the picture or description shows.The top/under section of mesh, actually is quite soft, It's not really padded, but neither is it just rough mesh. He hasn't shown any discomfort from the straps or the mesh. We only use two bottles, one on each size, as our trainer tried four and it was just too heavy for him. We're not trying to weigh him down, just add a little more to his work out.

We love the way this day pack fits and looks on our Husky. We ordered a sm/med size for her. She's about 50 lbs, and I only had to adjust the first stomach strap closer to her neck. I also like the straps that connect the two bags together, I'm hoping it helps keep the balance shifted. It has a comfortable pad on the front chest snaps and on the bottom 2 snaps. It's generally easy to put on, from a family with avid dog hikers with experience in many different packs. It appeared to be made well, and we're looking forward to taking it out on the trail, I just hope it holds up because my dogs are rugged. The pockets look like they'll hold a lot of stuff, which will be great for when my husband, dogs, and I attempt the Appalachian trail. Will update in the future if I have anything else to add or edit! 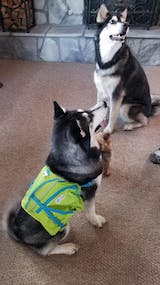 9 minutes ago from Portland, OR.
Daniel purchased a

5 minutes ago from Boise, ID.
Timothy purchased a

18 minutes ago from Phoenix, AZ.
Greg purchased a

14 minutes ago from Austin, TX.
Shavon purchased a

13 minutes ago from Los Angeles, CA.
Veronica purchased a

2 minutes ago from Cheyenne, WY.
Crystal purchased a

2 minutes ago from Atlanta, GA.
Megan purchased a

14 minutes ago from Portland, ME.
Jaime purchased a

5 minutes ago from Denver, CO.
Chris purchased a

2 minutes ago from Hartford, CT.
Elizabeth purchased a

8 minutes ago from Topeka, KS.
Gidget purchased a

4 minutes ago from Boston, MA.
Samantha purchased a

16 minutes ago from St. Paul, MN.
Danette purchased a

5 minutes ago from San Diego, CA.
Monique purchased a

12 minutes ago from Harrisburg, PA.
Valerie purchased a

17 minutes ago from Albany, NY.
Sean purchased a

7 minutes ago from Santa Maria, CA.
Marcus purchased a

5 minutes ago from Portland, OR.
Daniel purchased a

18 minutes ago from Boise, ID.
Timothy purchased a

4 minutes ago from Phoenix, AZ.